Juha Pentikäinen: Golden King of the Forest - The Lore of the Northern Bear 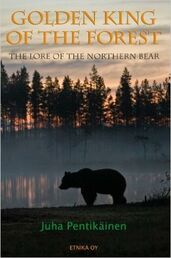 Juha Pentikäinen: Golden King of the Forest - The Lore of the Northern Bear

This book presents the bear, the divine being who descends from heaven and begets the forefathers of the clan, as he appears in the myth and folk tradition of the Northern World of Finland and its neighboring lands.

This brand new book describes how, though a god, the bear was ritually hunted; his body was then reverently buried, while his skull was hung upon a sacred pine tree, symbolizing his ascent back to his heavenly home.

The ancient Finnish poems, set down in writing from the seventeenth century on, are examined and presented in Finnish as well as in English translation, and the profound significance of the bear within Finnish culture up to the present day is put before the reader.

Professor Pentikäinen has produced a series of of prize-winning books, films and exhibitions based on his field work among the indigenous peoples of Siberia. He is leading expert on Finnish and Sami mythology and beliefs and an accomplished scholar of the Kalevala.